On Saturday evening, I was in New York, visiting a cousin who'd recently had a baby.  The wife was in Norman, but was at a wedding (we got the wedding invite after I made my Northeast trip plans).  The kids were at home with the grandparents who are visiting.  With both parents out, S1 had gotten into his head that he needed to take care of his non-English-speaking grandparents and little sister.  He was the man-of-the-house, though where he got this idea, I don't know.  We certainly have never even used that phrase in front of him.
It all started when he called me for help with a computer.  "The laptop that grandpa uses to watch his TV does not start up," he informed me, "it says something about no boot image on the partition. I tried shutting down and restarting it and that didn't help."  I had him look for any storage devices connected to the computer.  There was no DVD in the computer, but he did find a USB drive, so he removed it and reported that the computer was starting up now, but that the resulting desktop looked weird.  "It has a different picture in the background," he commented thoughtfully.
The grandparents watch Tamil TV channels on the internet, and because many India-based websites are virus laden (even the ones that you pay $20/month for), I'd connected a dedicated laptop to the TV and asked them to use that for reading Indian newspapers and watching Indian TV channels.  And to avoid having to reinstall all the software on it every time the machine gets hosed, I'd installed everything on a virtual machine.  That way, every couple of weeks, I'd wipe out the current VM (which by now would have all kinds of viruses and tracking software), copy over a pristine VM and let the whole process go again.
Obviously, the host OS had started up, but the VM hadn't.  So, I had him find the VM manually and start it. He did so, and was very proud to go tell grandpa that he'd fixed the computer (with some assistance from New York-based tech support, of course).
An hour or so later, he called again.  He'd been playing outside when he noticed a funnel-like thing with clouds moving very fast.  "Is a tornado coming to our house?," he asked me, "should we go hide?"   See this picture of the storm by a friend taken at about the time of S1's phone call -- it's a rainfoot/microburst, not a tornado -- but S1 couldn't know that, of course. 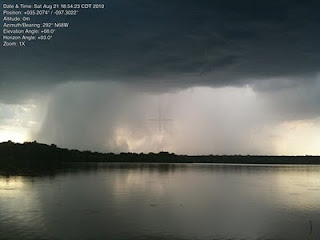 Photo (c) James G. Ladue
I had him switch on a local TV station and look at the warning.  "It says thunderstorm warning," he said.  "If it doesn't say tornado watch or warning, you guys can relax," I told him.   By this time, this alert was sitting in my email box, but it was a better learning experience for S1 to have him look at the TV than for me to tell him the answer.  (The blue is my personal alert area; the black the NWS warning area; as you can see we were on the edge of it. ).  It turned to be a heavy rainfall and heavy damage event, concentrated to our east. 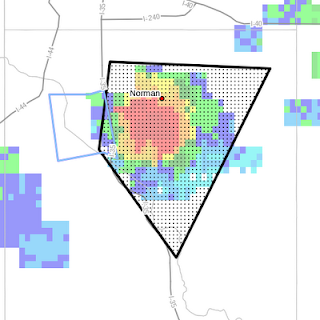 At one level, it's funny and rather cute that he would decide that he was man-of-the-house. But another part of me is rather proud -- when I was eight years old, there is no way that I could taken charge of things like that.
at Tuesday, August 24, 2010 2 comments:

The Zen of rain gauges

If rain gauges don't capture rainfall, did it really rain?

Leh, in northern India, lies within a rain shadow region of the Himalayas.  There was a freak cloudburst (rainfall on the order of 100mm/hr) there earlier this month that caused mudslides and hundreds of fatalities, but it was so localized that the weather station in Leh recorded just 13 mm of rainfall!  As far as the records are concerned, there was no cloudburst, just normal rainfall (monthly rainfall in August averages 15 mm).
at Tuesday, August 17, 2010 1 comment:

Gandhi spinning in his grave

August 15 in India is Independence Day. The malls in Delhi, full of Western goods, are now decked out in the colors of the Indian flag. Somewhere, Gandhi and Nehru are spinning in their graves. 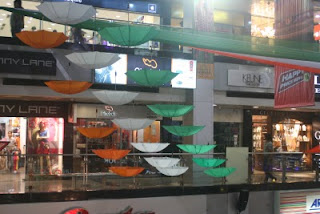 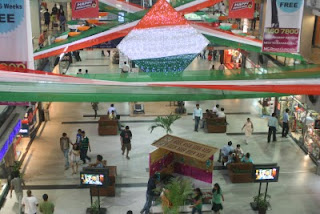 It's easy to forget how old even some of the more recent buildings in India are. The Red Fort in Delhi, for example, was built by one of the last Moghul kings (before they lost their empire to the British). When it was built, water was pumped up from the Yamuna river and used to keep the palaces cool. 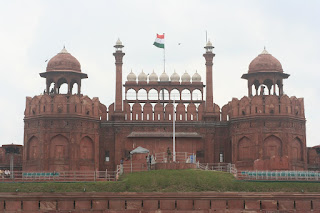 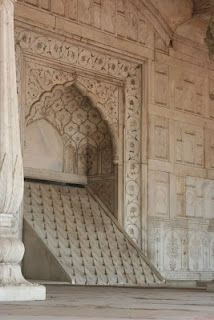 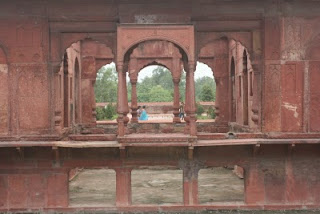 Now, though, the Yamua river is more than a mile away. The river has moved that much since the time that the fort was built.

Everything I'm seeing in India tells me that Krugman is right when he says:

Everything we know about economic growth says that a well-educated population and high-quality infrastructure are crucial. Emerging nations are making huge efforts to upgrade their roads, their ports and their schools. Yet in America we’re going backward ... the end result of the long campaign against government is that we’ve taken a disastrously wrong turn.

What happens when you walk into a slightly upscale Indian restaurant by yourself?

"You are here aah-looone?", asks the waiter, extending the word "alone" for a full five seconds and saying it loud enough for half the restaurant to turn around and look at you. He then seats you in the middle of the restaurant at a table meant for six. Determined not to be embarrassed, you pull out your e-book reader and start to read. At which point, the old lady at the table over leans over and asks if you are praying.

And that's when you decide you'll never go to an upscale Indian restaurant by yourself.
at Monday, August 09, 2010 1 comment:

The kids sold lemonade and snacks at an Oklahoma City metro-area gathering on Saturday and cleared $10 each.  S2 fell asleep on the way back but S1 was full of excitement when he got back home at 11pm (at which time I talked to him over Skype).

He had ideas for how to make more money next year: (1) better stall location ("our tent was right at a turn and people couldn't see us"), (2) different products ("the tent that had plates and real food sold 300 dollars and some people went and bought from them a second time") and (3) a more enthusiastic sales force ("S2 would not ask people if they wanted to buy a bag of snacks").   The only thing that was missing was a PowerPoint slide with future expected revenues if these changes were made.

Unfortunately, the excitement turned to disappointment when he started leafing through a toy catalog to see what he could buy for $10.  It doesn't go that far, he quickly realized. I am afraid that he's going to shoot for that $300 product-line next time and that we will get stuck having to make it in our kitchen.
at Sunday, August 08, 2010 1 comment:

The last time the kids came back from India, they came back hankering for "real pizza". The wife said that they'd had Domino's pizza in Chennai, so I wasn't sure what they were talking about. It's not as if the kids are gourmet pizza fiends or anything. They even eat the pizza I make.
When I saw a Pizza Hut in Delhi, therefore, I decided to go in. The pizza tasted just like Nan (the North Indian flat bread)! Nan with curry on top.
at Tuesday, August 03, 2010 1 comment:

Ruins before they are sanitised

I was walking from Qutub Minar to the metro station (Delhi's metro system is being dramatically expanded and it's a very nice way to get around) and for a long stretch, the road goes past a walled garden. A really long stretch. At one point, the wall had broken down. To go in or not? Would I be trespassing? But all the greenery was tempting, so I went in.

Turns out that I was not trespassing. There were signs inside that said that it was "Mehrauli Architectural Park". 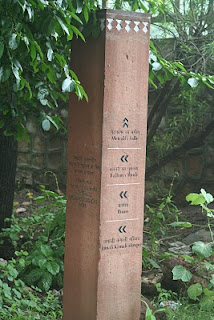 But the monuments themselves were completely overgrown. Know those pictures every historical site has about how the place looked when the first archaelogist/explorer was led there by a local shepherd? That's how the architectural park looked. Ruins everywhere, overgrown with greenery. It was very pretty -- and after the crowds at Qutub Minar ("more visitors than the Taj Mahal"), the lack of another soul in this archaelogical park was blissful. 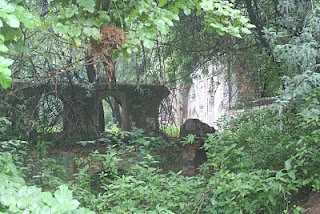 It was when I saw the plaques that I realized what was happening. The plaques all talked about conservation efforts that had started in the late 90s. The conservation work had been started recently, and it being Sunday, there were no workers around. They mustn't even have gotten around to building a gate -- I'd come in through a construction entrance. Hmm ... may be I was not supposed to be here. 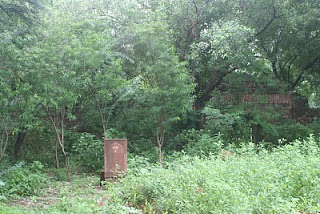 Was the park open to visitors or was it an archaelogical site in progress? I don't know, but I did have a nice look around. It's so rare that you get to see actual ruins, in a state of being ruined, that I was enthralled.

And just as I was about to leave, I saw a couple of teenagers. They were scrambling up on to one of the mosques. Maybe the place needs a gate after all. 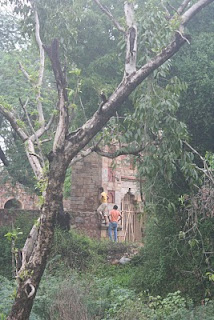 P.S. turns out that there is a gate; the break in the wall that I (and the teenagers?) came in through was not supposed to be there. Here's a nice article on Mehrauli Architectural Park -- it's worth a visit before it gets all cleaned up and sanitised.

Qutub Minar is a brick tower that was built around 1200 AD by the first Muslim ruler of Delhi to commemorate a military victory. Probably because it is so easily accessible, it is the most visited historical site in India. 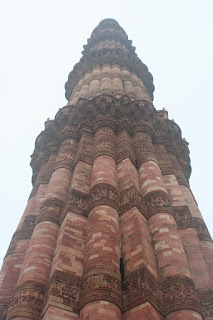 This iron pillar which commemorates a military victory by a Hindu king around 300 AD was uprooted from its original location and installed here in the Qutb complex. There was originally a Garuda (a mythological bird that the Hindu god Vishnu rides) on top of the iron pillar, but the Muslim kings presumably destroyed that idol. 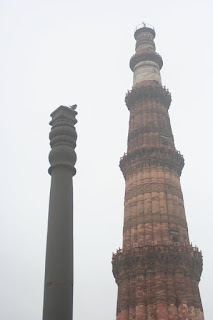 Uprooted, headless and a convenient roosting spot for pigeons, the iron pillar serves as an ironic counterpoint to the stone victory tower built by Muslim kings. Reminded me of Shelley's Ozymandias.

In Peru, we saw lots of churches that were built on top of Inca foundations. So much so that there are few pure Inca buildings left (this is what makes Machu Picchu so unique: it was hidden in the jungle and the Spaniards never found it). The Muslim invaders of India couldn't destroy and build over all the Hindu temples of course -- there were too many of them -- but they seem have to given it their best shot. This hallway around the Qutub complex consists of pillars ransacked from Hindu and Jain temples. 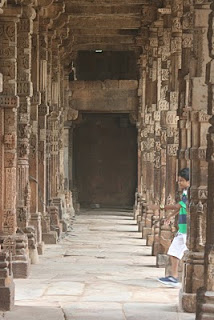 Interestingly, the Afghani Muslim invaders of the 1200s seem to have been zealous enough to ransack Hindu temples, but not fundamentalist enough (or barbaric enough) to destroy the art in them. Thus, they seem to have had no problem having this dancing girl gracing their mosque. Sadly, today's Afghani Taliban are not merely a throwback to the 1200s; they are worse.