Turning around on a dime, well 50 billion of them

India used to be a socialist, state-managed economy until it couldn't anymore. What made the system unsustainable was government debt, but the amount involved shocked me:


Singh told the prime minister that the country immediately needed a huge standby loan of at least $5 billion. To manage the current financial year would only require $2 billion, he suggested, but it would be prudent to take a larger loan from the IMF in anticipation of ongoing problems in the following year

So the reason for India's economic miracle was the need for a $5 billion loan. Manmohan Singh (then the finance minister and now the prime minister) liberalized the economy in order to convince the World Bank to lend India the money. Liberalization motivated private entrepreneurs who swept in, and the rest is history.


How small is $5 billion in the context of governments? Germany essentially loaned $600 billion to Greece, and that was just today. This is widely believed to be not enough.  Obama's first stimulus, the one that kept the US out of depression territory, was $800 billion.


It amazes me that India turned around on $5 billion.

How to treat an illegal immigrant

I was talking to a colleague about Elie Wiesel and pulled up the Wikipedia entry on him. One sentence, deep in, stuck out:


In 1955, Wiesel moved to New York City, having become a US citizen: due to injuries suffered in a traffic accident, he was forced to stay in New York past his visa's expiration and was offered citizenship to resolve his status.

This could never happen now, could it? Can you imagine the US government offering citizenship to a foreigner who overstays his visa?

p.s. A blowhard presidential candidate is being raked over the coals for probably the two decent things he did as governor ... one of them being to allow children of illegal immigrants to pay in-state tuition at state universities. The Republican primary has been deeply revealing. The audience has cheered for hundreds being executed and for an uninsured person dying of toothache. They have a booed a gay soldier currently serving in Iraq.  I cringe to think that, as recently as the 2008 election, I voted for more Republicans than Democrats. Culturally and morally, I have nothing in common with these people. But I also am disappointed with Obama's ability to fight the good fight. Where does this leave me? I don't know.  Can I have a party that is centrist, like today's Democratic party, but is capable of fighting for what it believes in?
at Friday, September 23, 2011 1 comment:

Towards a two-state solution

In 2011, fed up with Israeli intransigence on negotiations and continued settlements, the Palestinians decide to go to the UN and ask for recognition of statehood.  Israeli right wingers warn ominously that this means that all previous agreements with the PLO will be null and void. The US threatens a veto.

Here is the thing. Both the wall and statehood are two sides of the same coin. By asking for statehood, but only on part of the land, the Palestinians are recognizing Israel's right to exist and essentially giving up on their pipe dreams of a right to return to captured lands. By building a wall (even with the settlements), Israelis were giving up their claims to the part of the land beyond the wall. This is the two-state solution that everyone claims to want, albeit with the boundary issues remaining unresolved.

So why the acrimony? Is it because everybody wants to be able to claim that they "forced" the other side to accede? Rather than negotiated solution where each side admits that it gave up something, Israelis and Palestinians are going for bragging rights. For saving face.

Every one of the five pieces the wife entered into the county fair won first place in its category. Her knit shawl was selected "best of show". 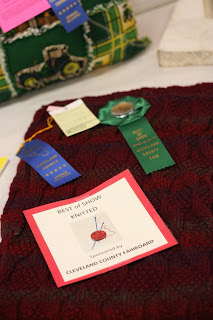 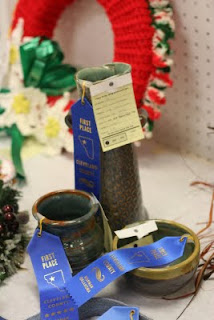 Sometimes, when I'm out of town, she'll take the kids to the pottery studio if she has to finish off some trimming. And at that time, the kids play around with pieces of clay. They entered the best of those, and both of theirs won second place. S1's the brown "hut" and S2's is the orange cup. 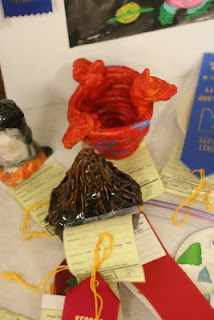 Yak horns on a stupa

Ladakh ("Little Tibet") is Buddhist, but the old-time animist religion was never far below the surface. So, while Buddhism is essentially agnostic on the subject of whether there is a God, the belief system in Ladakh favors stories of supernatural beings. There are Buddhist stupas everywhere.

Stupas are a very abstract representation of Buddha's teachings. But, near Pangong Lake was where I saw the perfect blend of Buddhism and animism: a collection of yak horns on top of a stupa: 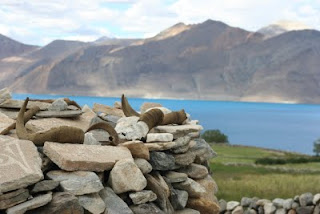 Talking of Pangong Lake, it is a remote saltwater lake at 14,000ft, straddling Ladakh and Tibet. To get there, you go through a mountain pass that is at 18,000ft. The scenery is stark, so stark that my photos of Pangong Lake all look unreal, almost computer-generated: 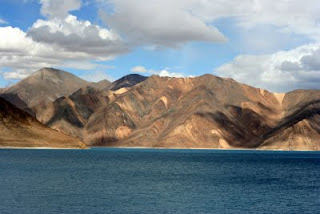 What brought that to mind was a recent study on climate change and politics that landed up in my email inbox. Based on a survey of self-identified Democrats, Republicans, Independents and Tea Party types, these are the relevant beliefs of Tea Partiers:


#2 is an objective fact, not an opinion: something like 95% of all climate scientists insist that global warming is happening. If you believe in scientific evidence then, and are willing (like most scientists) to give credence to the scientific literature in other fields, #1 is also an objective truth.

But #4 is what is truly insane. It's the group of people with the most wrong views on a topic who believe that they are well-informed and are unwilling to listen to reason.