Who designs airfares and what's so special about Delhi?

I'm trying to book travel to India this summer and I need to go to both Delhi and to MAA (Chennai). I'm trying to book it so that I can fly OKC-MAA and then from DEL-OKC.  Indian carriers are nice enough to price one-way tickets exactly half the cost of a round-trip so I can be pretty flexible on when I do the MAA-DEL thing.

But booking a multi-city OKC-MAA, DEL-OKC trip is providing quite a lesson in airline pricing. It's cheaper to fly roundtrip OKC-MAA-OKC than OKC-DEL-OKC even if the stop-over is in Delhi! Something to do with competition and convenience, I suppose -- there are direct flights from DEL to several East coast cities but MAA is too far south for a direct flight. You have to change planes in Europe or in Delhi.

Now for the irrational: I can fly from DEL to MAA, then hop on a plane to OKC through DEL for cheaper than it takes for me to fly from DEL. In case you didn't quite catch that, the airlines will pay me to take a round-trip from DEL to MAA.

I ultimately ended up buying a ticket from Jaipur to OKC via Delhi. Instead of paying extra to fly out of Delhi, I'll pay a cab to take me to Jaipur, tour the city and then fly out.
at Thursday, March 31, 2011 No comments: 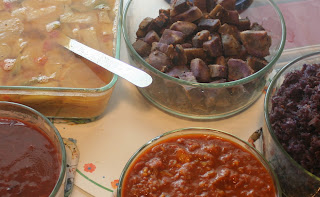 I spent almost the whole morning cooking and the results are on the left ... Clockwise from top-left: mixed vegetable sambar, sweet potatoes, cabbage, fish curry and kidney beans.

It's less work than you might think. It took me 2.5 hours to cook, wash the pans, take a picture and write this blog entry! The kids and wife were off to the temple, so I could have Mani Iyer blasting away while I cooked. Music and cooking -- now, that's a very relaxing way to spend a Sunday morning.
at Sunday, March 27, 2011 No comments:

Don't read this article because it will drive you crazy

I don't want to recommend that you read Joe Nocera's article in the New York Times because it will only get you all foamy in the mouth.

A man goes to jail for boasting to an attractive IRS employee on a fishing trip about taking a liar loan. There seems to be no proof that he actually lied; the broker who testified against him in trial is now in jail for fraudulently changing mortgage applications. Meanwhile, the CEOs of the companies who knowingly made liar loans and employed those fraudulent brokers get golden parachutes. The other thing that got me going is how the whole prosecution seemed to be motivated by envy. The small fry go to jail but the really big fry buy off the politicians by giving them multi-million dollar jobs after retirement.

Okay, I am off the Obama bandwagon. I'm sorry that I voted for the guy.

Why? I'm counting only the issues that the executive branch could fix unilaterally, without any effort from Congress.

Don't tell me the other guy would have been worse. That's no consolation.
at Wednesday, March 23, 2011 No comments:

You get what you pay for: the TaxAct episode

I finally bit the bullet and decided it was time to do my taxes. TaxAct seemed tempting -- free to try, pay when you file. So, I entered all the info into TaxAct. Mostly, I skipped the interview questions and filled out the forms directly -- my tax return mostly consists of entering information from various 1099s, so it's not all that complicated.

Initially, therefore, I didn't see much of a difference between TaxAct and its costlier brethren. Towards the end, though, the surprises started.  First, it said I owed the Alternate Minimum Tax (AMT). Well, that is possible, I suppose. And a rather stiff tax underpayment penalty.  However, I went and added quarter-by-quarter income and got the Federal penalty nearly waived. Still, TaxAct was of no help in this process. Whatever money you'd have saved by using tax software, you'd have lost if you didn't realize that breaking out your income by quarter could get rid of the underpayment penalty.

The Oklahoma return experience was incomparably worse.  Nearly to the finish line, I get this:

Now trying to decide if I should go to an accountant, or should do what I did in previous years and use Turbo Tax. What do you think?

UPDATE:  I repeated the whole exercise on Turbo Tax. When it comes to the AMT and figuring out underpayment penalties, Turbo Tax also sucks.  I went back and looked at TaxAct's final numbers and they were $115 lower.  I could not figure out what the difference was: I think it just comes down to how the two programs interpret the tax laws. Anyway, I filed using TaxAct.
at Tuesday, March 15, 2011 6 comments:

Waiting for the locusts

Earthquake, tsunami, fire (I can see it out of my office window) ...

Visionary leader? Out of the dark ages?

Oman is the only Arab country that I have visited, so I've always thought of Oman whenever Arab countries are mentioned in the news. Oman struck me as very much a upstairs-downstairs sort of country, with an immigrant underclass toiling away while the natives lived on their petrodollars. There were grand museums and enormous embassies set miles apart in desert sand. The only people out on the streets were blue-shirted people from the subcontinent. It was a positively medieval sort of place.

Our tour guide was a native Omani, who seemed to be rather unused to the concept of working for a living. It seemed to be more of a hobby for him. But after asking where we were from, he did manage to insinuate (this was soon after 9/11) that America had more violence coming its way. My visit to Oman, it's safe to say, left a rancid taste in my mouth.

So, when the NY Times runs a boot licking column lauding Oman's sultan as a


visionary leader who brought our country out of the dark ages and into a state of modernity; Sultan Qaboos bin Said has placed Oman at the forefront of many Arab countries, if not of the world, in terms of rights for women, people with disabilities and foreign workers and in providing free education and health care for all.

I can only shake my head in disbelief.  The standards for being a visionary leader and what constitutes the dark ages must be pretty low in that part of the world.
at Wednesday, March 09, 2011 No comments:

My talk on Hinduism 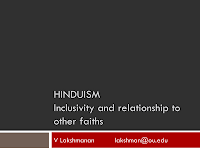 One of the local churches asked me to give a talk on Hinduism (the link takes you to my slides as PDF). It turned out to be a lot of fun.  I got so many questions that I had to rush the last part, but that's always a good problem to have.
at Sunday, March 06, 2011 No comments: