A friend recommended that I pick up Osamu Tezuka's series on the life of Buddha and so I'm now reading my first manga. Tezuka is widely regarded the father of manga, the one who essentially reinvented it as a modern literary and art form. Buddha was his last major epic and so, I lucked out in starting with one of the masterpieces of the genre.

The imagery is gorgeous. Many of the panels are incredibly detailed, finely-wrought landscapes. This, for example, is a scene in which the young Siddhartha and a rebellious slave are sailing down a river. An entire page, that would take who-knows-how-long to draw, just to establish the fact of a journey. 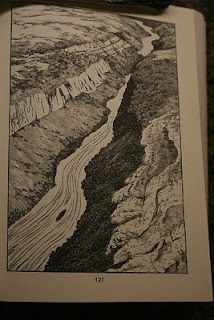 The attention to detail of the execution does not carry out over to the content of the images, though. There is much that is anachronistic. For example, the geometric motifs that dominate in his rendering of the palaces date from the anti-idolatory of India's Muslim rulers. Buddha lived nearly 1400 years before Mohammed, though, so the palaces ought to be full of dancing figurines. Because Japanese and English are written in different directions, the images are all reproduced in the English edition in mirrored form. Mostly, it works. Except when it doesn't. Here, for example, the image has some Hindi text. Hindi, is of course, also anachronistic. In 600 BC, they didn't speak Hindi. But anyway, the Hindi text is mirrored and that's like something out of Leonarda da Vinci's notebooks. 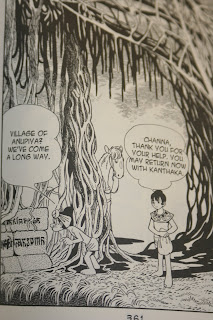 Some thing that surprised me was the explicit sexuality of the story. Most stories of Buddha stick to his philosophy and present Buddhism as an atheistic, monastic religion. But in Tezuka's rendering, it's God (Brahma presented as an old man) who keeps redirecting a sickly, bored youth back towards his destiny. And it is power, sex and revenge that keep the narrative going. A very, very good book.

I'm now a fan of manga and hope other manga are just as good. Any recommendations?
at Monday, February 22, 2010 No comments:

Not even a high bar to clear

You should read the really funny comparisons of how the travel industry and the newspaper businesses would work if they were like the US healthcare system.

"I'm sorry, we have nothing open on that date. You might try another carrier."

"I suppose I'd better. Who has availability?"

"You can call them individually and ask. I'm sure you can find one."

In addition to bills from me, you’ll also receive bills from your newspaper carrier, The New York Times itself, the forest products company that makes the newsprint, and the copy editor for this column. Don’t forget to pay the copy editor, or future columns will omit headlines.

But here's the thing: the travel business and the newspaper business are both barely profitable. Their long-term outlook is poor, because they are being rapidly replaced by cheaper online alternatives. It's now possible to conduct business meetings online; newspaper content has to compete with specialized content available elsewhere on the Internet -- when Sports Illustrated is online, what value do the New York Times sports pages provide?
What does it say about our healthcare system when it can not clear even such a low bar?
at Sunday, February 21, 2010 No comments:

Like ancient Gaul, my friends seem to belong to three tribes.

There are computer geeks:

Science and art: how not to do it

When people talk about the need for more interaction between art and science, I'm sure they don't mean this:

William Fals-Stewart, a former researcher for the UB Research Institute on Addictions, faces criminal charges for allegedly hiring actors to act as witnesses on his behalf at a misconduct hearing.

And no ... his name is not made up. He's really called Fals-Stewart. He apparently told the actors they were acting in a mock trial and gave them a script where the actors praised his research practices.
at Wednesday, February 17, 2010 No comments:

Get the TSA to secure faculty meetings

Amy Bishop, the neurobiology professor who allegedly shot 3 people at a faculty meeting in Hunstville, Alabama, wrote a novel about a scientist who killed her brother and then made up for it by being really good at her work. And guess, what? Her brother then got shot, but it was ruled an accident. Also, her dissertation advisor got a couple of pipe bombs in the mail when it was touch-and-go on whether she'd graduate. That's a couple of coincidences too many -- the Boston police are not coming off too well on all of this.
But this got me to thinking ... how many faculty members are packing heat when they come to meetings? How many ABD (all-but-dissertation) students are Googling up instructions to build a pipe bomb?
Perhaps we can ask the TSA to build a no-educate list? They could also carry out full-body searches and ask faculty members to take their laptops out of their backpacks. Test for gunpowder residue on books. Raise the threat-level to orange any time a junior faculty member is denied tenure and raise the threat-level to red if the faculty then appeals the decision to the board of regents. We could even have disembodied voices on a loop warning of the threat-level and telling people to report any pencils dropped on the floor.
at Monday, February 15, 2010 No comments:

So this is why you can't edit a Facebook status

Some time ago, I griped that it was impossible to edit a Facebook status once you posted it.
So, this is why.

Snow on the ground in Syrcause, NY 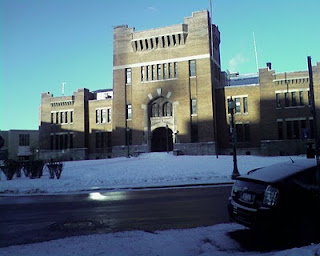 A colleague in Norman has predicted snow on the ground in all 50 states. Of course, there is snow on the ground in mountain areas in many parts of the country (Mt. Kea in HI, Taos in NM, Lake Tahoe in CA, etc.), so this is really a call about the South-eastern United States, which are getting pounded by snow today.

Anyway, he was asking for pictures (send yours to snow@forwarn.org) and this was my entry -- it shows snow on the ground in front of the Old Armory building in downtown Syracuse.

This being Syracuse, it's also actively snowing. Just a few snow flakes though.
UPDATE: Yup, all 50 states.
at Friday, February 12, 2010 3 comments:

Nation's best barbecue (or why you shouldn't trust the media)

When I was visiting Syracuse recently, a local told me to try out Dinosaur Bar-B-Que, saying that it was recently voted America's best barbecue place. When I'm traveling by myself, I hate going to a sit-down restaurant, but ... such a good barbecue place in the nation's snowiest city (although this year, Washington DC may take the crown)? I swallowed my skepticism and distaste of eating alone, took a book (Strangers in the Land of Egypt by Stephen March) and went.
The ribs were decent but the chicken was awful. I didn't try the shrimp and I don't eat beef. So, overall, I'd rate the place 3 on a scale of 5. America's best barbecue joint? Not even close. Even the overwrought chain restaurant down the street from our office has better meat than this. If I had any doubt about whether America's national media were doing their job, it's all settled now. They simply have no clue.
So, anyway, what's my choice for best barbecue? I have to go with an Oklahoma place, of course. And that would be this little shack just north of Pontotoc, Oklahoma. I don't remember the name of the place, but here it is on Google Maps. Well worth the 2-hour drive from Norman. I have good memories too of Salt Lick just outside of Austin.
at Thursday, February 11, 2010 No comments:

Innumeracy can lead to death

Placental abruption causes 6% of all maternal deaths; in a pregnancy with placental abruption, death of the fetus is 12x more likely than in a normal pregnancy. So, if a doctor tells a young mother that the placenta is detached from her fetus and that the fetus is dangerously underweight (which increases the odds from 12x to about 100x), she should take the advice to abort. That way, she has the chance to have another baby, and her existing children do not lose their mother.
To argue, like Tim Tebow's mom that you should ignore doctors' advice and carry on with the pregnancy any way, is appalling. It worked out for her, but it won't work out for 99 other women.
at Friday, February 05, 2010 2 comments:

Hold 'em all up 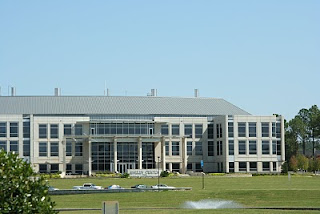 You can't make this stuff up.

Alabama senator Richard Shelby has put a hold on all of President Obama's appointments. Meaning that they can not be appointed unless the senate overcomes a filibuster.

Why did he do that? So that his state gets two pork-barrel projects: an aerospace contract and a FBI lab. Shelby is unapolegetic about his use of earmarks. And if I were from Alabama, I'd be fully in support of his behavior too.

But as a nation, it's not in our interest to have these kinds of rules. The Senate needs reform. The Brits did it with their anachronistic House of Lords a few years ago. We need to follow suit.

Photo: Shelby Center at the University of Alabama, Huntsville, Alabama.