The kids had pronounced Thirumayam Fort the coolest thing ever because it was their first day trip that didn't involve a temple. Partly to mess with the kids a bit, we went from the fort to a temple that we could see from the fort itself. 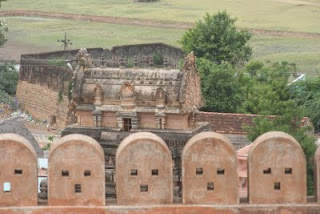 The temple was unpainted and so my expectations were high. I suppose I should explain.

The unpainted look that we associate with Greek and Roman statues is a modern trend. Most of the Greek and Roman statues you see in museums would have been painted when they were created. Along similar lines, Hindu temples that are active places of worship tend to be painted. It's the ones maintained by the archaeological department that are preserved in a quasi-ruined, unpainted state. Thus, I think of temples with unpainted gopurams as museum-chic. My expectations go up automatically when entering a temple with an unpainted exterior.

It turned out the temple was attached to the rocky outcropping on which the fort rested and was also maintained by the archaeological department. The art within the Thirumayam temple lived up to my expectations. It was quite gorgeous, with finely-wrought detail even on the pillars. The kids were not impressed, though. It was just another temple to them. 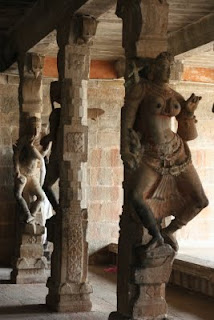 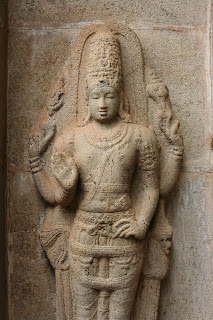 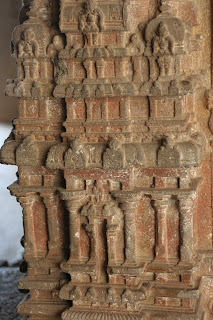 We took a bus (public transport!) to Thirumayam Fort, about 35 kilometers from the town where my parents live. The fort is only about 300 years old (it's built on the remnants on an earlier fort), but is impressively located and comes with a rich history. In particular, in the 1800s, it was the stronghold of Kattabomman, one of the first Indian chiefs to resist the British (he lost).

The kids didn't care for any of the history, of course. But they appreciated the day trip to something other than a temple. 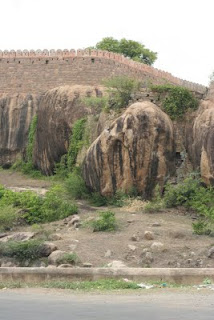 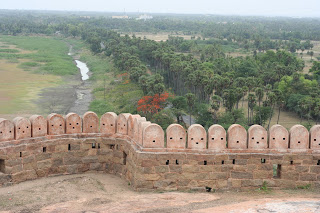 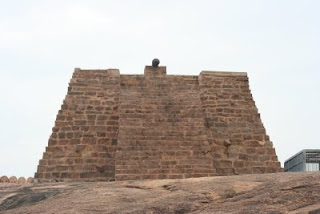 The old, the new and the tacky

The old: note how this asphalt road turns golden all of a sudden ... It's grains set out to dry. Because paved surfaces are rare in rural South India, streets get commandeered for the purpose of drying out grains. An added advantage is that when cars drive over the grains, some amount of threshing also takes place. 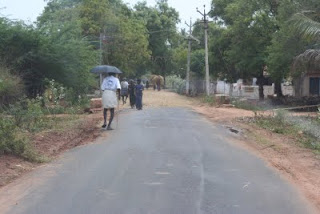 Now for the new: Last year, I pointed out a new water tank at a village near where my parents live. This year, the village sports a new elementary school and town hall. You know that the opportunities for India's most disadvantaged are looking up when villagers in the remotest corners pay to construct a school building and send their children to school rather than to work in the fields. 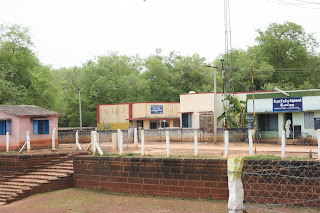 And the tacky ... more and more, pink-tiled homes are being replaced by concrete monstrosities painted in atrocious colors. The clincher is that the family that decided to paint their home purple feels the need to "ward off the evil eye" by also placing a gargoyle on the roof. Wouldn't the house paint alone suffice? Since no photo blog of an India journey would be complete without a picture of cows on the street ... 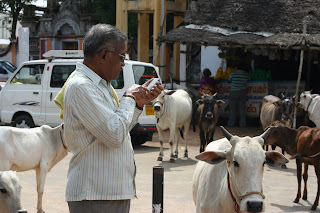 When I was going to college in Madras, we avoided Marina Beach ("second longest beach in the world") because it was a notorious tourist trap. Instead, we preferred to go to the beach in Besant Nagar in the evenings or to one of the small towns on the road to Mahabalipuram if we wanted to swim.

But the kids wanted to go to the beach, and my parents thought of Marina Beach first. "Elliots Beach?," my father asked sceptically when I suggested an alternative, and so it was to Marina Beach that we went.

The place had a carnival atmosphere as ever, with horses, carousels and all the works. But the vendors who used to simply pick a spot on the beach and do business had now become more permanent. Most had stalls. A couple of bicycle vendors, though, brought back memories. 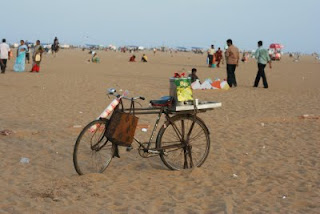 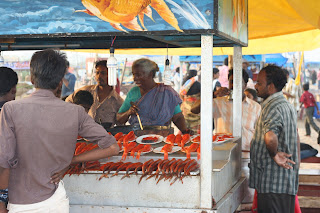 The visiting crowds were also not very different from what I remembered. It was mostly villagers visiting the big city for the first time. So, they gravitated to the familiar. The three lads in the picture below are sitting around a fortune teller soothsaying with his parrot. And the little girl in her daddy's arms has a string of jasmine flowers in her hair. 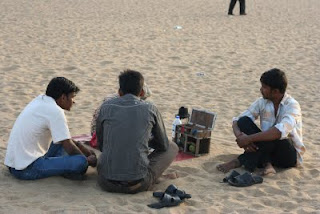 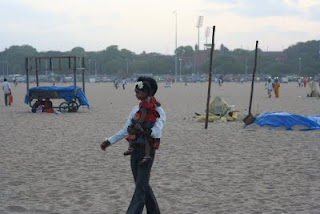 Using the Nook Color as a wireless projection device

I got a Nook Color and promptly rooted it. I then installed a VNC server on the Nook Color and a VNC client on my Windows laptop.  The idea is that if the laptop is connected to a projector, you can page through a slide show on the Nook, and whatever you see on your Nook will be reflected on the laptop and hence on the projector. The major advantage is that you gain mobility when giving presentations. You don't need to be stuck behind your laptop anymore.

See video here:
Instructions to do this:


Going forward, if you want to do a wireless projection, this is what you need:
Since most conference rooms now have WiFi, this is a pretty workable solution. You may need to talk to the organizers beforehand to have them install VNC client on the computer they hook up to their projector.
at Friday, June 17, 2011 2 comments:

The nine-year old was very excited. He'd gotten a letter from "someone in South Dakota".

It was Citibank offering him a credit card.

American Airlines canceled my flight from Chicago to Oklahoma City on Friday evening. There was something fishy about the cancellation: they claimed it was due to weather, but there was weather neither in Chicago nor in Dallas. Sure, there was weather enroute but other planes were not affected.

Anyway, American helpfully rebooked me on a flight leaving on Saturday afternoon. Saturday afternoon! And what was I supposed to do for the next 24 hours? Did they have seats available on a flight into Dallas, I asked. They did and were willing to change the final destination. I suppose I should be grateful they didn't want another $50 to do this.
Why Dallas? Because one of my regular bridge partners and I had talked earlier in the week of playing in a tournament in Dallas on Saturday. So, I called him. Would he be willing to come down to Dallas, play the tournament, and give me a ride back? He was game, and so the game was on.
When I walked into the tournament venue dragging my roll-aboard with me, quite a few heads turned. Was someone really flying in to play in a dinky sectional tournament? The director showed me a corner where I could stash the luggage; my partner showed up and we played the afternoon and evening sessions.
We came first in our direction (only 5th overall though) in the afternoon, but won outright in the much smaller evening game. For that achievement, we got our picture taken, a trophy (which prompted a "Good Job!" from the kids) and a medal.

This is one of the hands that put us over the top. My partner (sitting E) bid the small slam, and I played it for an over trick, to get us a top board:

As you can see, two pairs stopped at game, but my partner put me in 6S in the teeth of competitive heart bids from N-S. All the other declarers took the losing diamond finesse to just make the contract.  I found a better way. I took the Ace of hearts and discarded a diamond on the King of hearts. Then, I came to my hand with the Ace of clubs, and ruffed a club with the 10-S. a heart ruff to my hand and the third club was ruffed high. I then played the low spade to my hand, pulled trumps and claimed.
at Monday, June 13, 2011 1 comment:

Conversation with the daughter:

Me: "You are six years old. I thought you should be able to do at least 6 strokes." 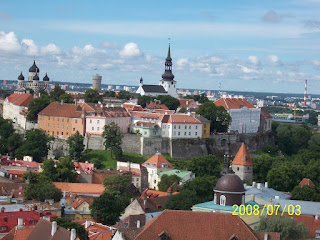 However, there are exceptions. One was a church steeple that you could climb in Talinn, Estonia. They would let you get out on the narrow ledge that surrounded the steeple -- apparently, killjoy lawyers haven't gotten to Estonia yet. 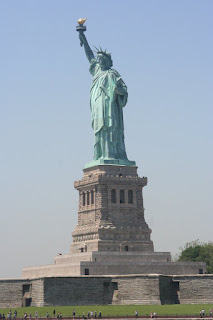 A second example turns out to be much closer to home -- the pedestal of the Statue of Liberty. And as with the Estonian church steeple, you get a view of New York City across the Hudston without being intermediated by glass. Plus, you can walk around and get a view of Jersey City and the Verrazanno bridge as well. 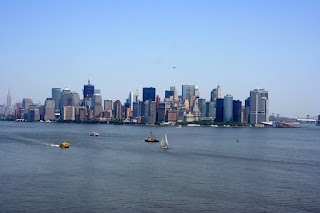 I'm thinking that it would be nice to create a list of viewpoints that are open to the public and afford great open-air 360-degree views. If you know of any others, leave a comment.