Three of my favorite things in the National Museum of Art in Delhi: 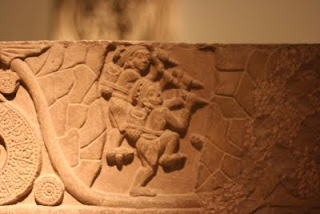 This one I love for its sheer self-reference. It's a stone carving of a pair of stone carvers. The expression on their faces is an inexplicable mixture of focus and resignation. Who said postmodernism is new? 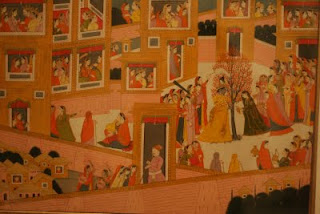 I never really got Indian miniatures from the Moghul era until I read Orhan Pamuk's novel "Red" which is set in the Isfahan. Islamic painters eschewed the use of perspective long after they knew the technique because they wanted to depict "God's view". That explains why you see people in every window, each doing their own thing. Meanwhile, the king in the bottom right is planting a tree to the approval of his entire harem. The colors are vivid, and the social commentary telling. 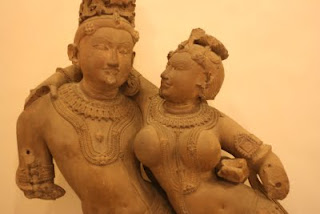 Take a load of this carving. They look sooo... comfortable, but it is not a comfortable pose. (try it). The illusion of comfort somehow lends dynamism to this pose.

As someone whose wife frequently complains about having to live in Oklahoma, I can totally understand the "one-body problem":

Your years of work, after all, have been spent in a discipline in which few jobs will ever open, and in an extremely competitive academic job market. Unfortunately, your spouse’s company is in an industry that has no presence in that part of the country ...

If you go on to get a PhD, pray for an understanding spouse. The entire blog, on 100 reasons to not go to graduate school, is worth a read. All things considered, I would still do a PhD, but one should enter a PhD program with eyes open -- the implications go far beyond just academics.
at Thursday, July 28, 2011 No comments:

A common question I get these days is whether I feel more at home here (in India) or in Oklahoma.  I don't quite know the answer to that. But, here's one incident that may give you a glimpse into my mindset.  We are at a restaurant.  There is a lull in the conversation and I start looking around a bit.

"Look," I hear myself thinking, "there is a little kid at that table who looks Indian." I turn around, ready to point this out to my daughter.  This is something we've gotten in the habit of doing in America. The six-year-old, especially, likes to be reminded that she's not a freak of nature.

I decided to learn how to program Android by writing a simple game.  You are given 8 letters and the objective is to form as many words as you can using those eight letters in one minute.  It works great on my Nook tablet and is rather addictive, one minute at a time.
Here are a couple of snapshots:

To play it, download wordrace.apk to your phone/tablet.  Use your file manager to go to the file and install it.  Yes, I could put it on AndroidMarket, but I didn't want to go through the trouble of opening an account for the three of you who are who are going to try the game out.
Let me know if you like the game.
at Sunday, July 24, 2011 No comments:

When Android first came out, a colleague and I put together a quick Android app to find the temperature given the latitude and longitude of the phone. Then, we lost interest in Android -- most of our work involves algorithms to process data from weather sensors. Not in creating tools for consumption.

Still, Android looks interesting. So, today when I had a couple of hours with nothing better to do, I decided to try creating a more modern Android app.  It turned out to be surprisingly easy.

The app is a "WordRace". Given a set of 8 letters, you try to create as many words from them as possible. Here is a snapshot of my first game on my app.  Even if I say so myself, the app is quite interesting. I wouldn't mind playing with this app to pass away a half-hour waiting for a plane ... 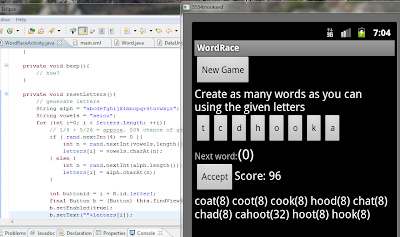 I plan to add a timer and some color. Then, I may put the app on Android Market (free of course). Let's see how that goes. Knowing me, I may lose interest by then.

p.s. I did add a timer and color, but didn't go through with putting the app on Android Market. You can download WordRace here though and install it directly. For screenshots of the finished see my blog entry on the finished Android word game.
at Friday, July 22, 2011 No comments:

All the stuff I'm reading about Google+ is very interesting. Placing people into Circles appears to be an easy way to way to "meter" the flow of information. I don't see how it solves the other problem I've faced with social media: of seeing important posts by acquaintances while not seeing all their posts. It sounds intriguing enough to try.

But I haven't actually used Google+ yet. Why? No invite! Now that I am off Facebook, I'm probably not seeing all the posts by friends asking if I want an invite. The irony, the irony!
at Tuesday, July 19, 2011 2 comments:

Losing even with the help of state champions

I'm in Bangalore now, visiting a college buddy.  This was the fellow who introduced me to bridge; he still plays regularly.  So, we went to his bridge club to play a team game -- by far the longest trip I've ever made to play bridge!

The teams were randomly assigned, and our teammates turned out to be one half of the state champions. That helped us to end up second overall.

This was one of the few bright spots on our side of the table:
At our table, the bidding went 1S by North (me), 2C by South, double by west, 2H by me, 3H by S, 3S by me (completing my 6-4 distribution and showing slam interest), but partner bid 3NT.  I took that to mean a slam try by partner ("serious 3nt"), but concerned that West's double meant he had a 4-card heart, I signed off in 4H.  They led a small heart, and I had no problem making 6 when hearts turned out to split 3-2. It was just that west had made an off-shape takeout double with 15 points.  Meanwhile, their teammates didn't get the double by West and drove to slam.  East made the natural lead of an unbid suit (diamonds). His partner cashed the two outstanding aces for down 1.

This was one of our poor boards:
With the six-card club suit, partner (North) nevertheless opened 1NT. I transferred to hearts and bid 3H. Partner corrected to 3NT and I corrected him back to 4H.  Down 2 when we had 3 heart losers on the layout.  At the other table, they opened 1C and had no problem staying in 3NT.
at Saturday, July 16, 2011 No comments:

I suppose I didn't quite come out and say it in my last post, but those pictures were taken when some friends and I went on a safari in a national park in Rajastan. Those animals were not by the side of a random road. 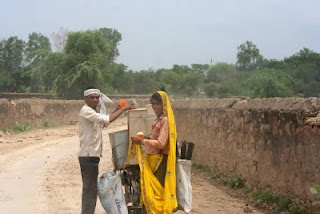 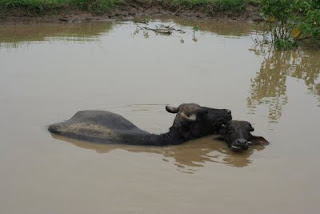 Safari over, we went to Bhangarh, an old ruined palace/fort/market. It is very, very nice. Reminded me very much of Machu Pichu. 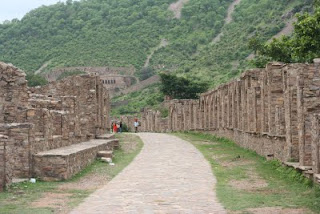 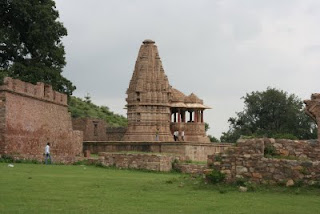 Wildlife near the road

Budweiser, at home every where

I'm at a restaurant in India and looking at their drinks menu.

Under imported beers, they have Heineken and Corona.

Under domestic beers, they have Kingfisher listed, appropriately enough.  The second "domestic" beer? Budweiser!
at Tuesday, July 05, 2011 No comments:

Having complained about the lack of courtesy towards strangers in India, I should point out one area where I'm seeing a lot of change in Indian mores.

It's in terms of class (caste) consciousness.  When I was growing up in India, uneducated rural lower-caste folk would not even come close to educated, city-dwelling upper caste folk. More and more, I am seeing, that is no longer the case.

On this trip to visit my parents in rural South India, I found that strangers joked easily with my six-year old, pinched her cheeks, offered her food, etc.  Interestingly, though, it was only with my daughter that they interacted freely. With me, they were not so forthcoming. I had to initiate the conversations and once they saw that I was safe, they opened up to me as well.

I also experienced change from the other end of the caste spectrum. I remember going to a Brahmin household with my father when I was a boy.  We had to talk to the priest of some temple that my dad was giving money to and the priest wasn't present. We waited outside, standing, until he came back. Almost a mirror image of that encounter happened recently. We went to another Brahmin household, this time to talk to a man who might be able to give Carnatic music lessons to my ten-year old. He wasn't home, but we were instantly invited inside while his family dug up his mobile phone number. Both these happened in the same rural part of South India, but the thirty intervening years probably explains the different attitudes to having a person of unknown caste enter one's home.

The old class-and-caste hangups seem to be vanishing.
at Monday, July 04, 2011 No comments:


In India, to be someone’s house guest or son-in-law or teacher can be delightful. To be a stranger beside the same person at the cinema or bank or airport is another experience altogether.

Since I am in India now, I can see this cultural propensity everywhere.


Last night, for example, I was getting out of a plane. I waved through the person on the seat across the aisle from me. I need not have bothered because he was squeezing through anyway without any acknowledgment of my presence, and right behind him were the passengers in the seat behind us, and the seat behind them as well. If I had not shoved my way into the melee, I'd probably have been trapped on the plane by passengers jostling to get on the plane on its return trip to Madras (I'm joking of course).


Remember that these are people taking a plane to travel within India -- probably the richest, most educated slice of the country. As Giridharadas notes:

He ends with a hope of moral suasion to change the country's mores. Having now visited India every summer for the past few years, I think he is overly optimistic. I see no hope of any change happening any time soon mainly because people fail to notice courtesy in others. And only when they begin to notice courtesy, and to cease thinking that people obeying rules are idiots, will they even think about extending courtesy and obeying rules.

How spoilt are we in the USA when it comes to weather radar imagery?
It started to thunder and rain in the evening and I got a hankering to look at some radar data. I pulled up the a website of Doppler Radar Products in India ... and all I got was this ... no 1/4 km resolution radar data, no Google Maps overlay, no hail products or echo tops ... just a Max Z plot ...

I was feeling quite disappointed until I realized that the range was only 250 km, so that the thunderstorm in my backyard doesn't even show up. Then, I was truly suffering data-withdrawal.
at Friday, July 01, 2011 No comments: