What S1 was doing in the 89er day parade 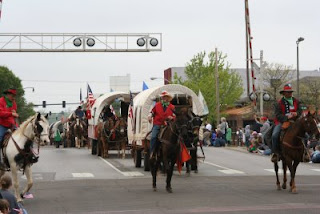 One of the local banks had a float in the 89er day parade on Saturday (This commemorates the land-run of 1889 that culminated in Oklahoma becoming a state sixteen years later). Since the theme of the parade this year was "green", the bank outsourced part of their float to S1's second-grade class and their recycling rap.

That's why S1 was marching in the parade with a host of other green-clad little people. I'm sure he's not the kind of Indian the original 89ers had in mind.