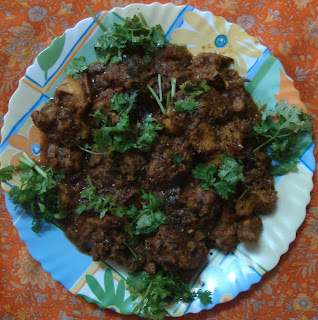 I got pointed to an excellent source of Chettinad recipes recently. One problem with a lot of Indian recipes (whether in books or out on the Internet) is that they are written by people who never ever cook from recipes -- they cook by sight and smell, and so, the amounts and times are often just a wag. If you've never tasted the dish before or seen it being made, it's quite hard to just follow the recipe.

To see if this blog was any different, I looked at the recipes for Chettinad chicken and for mandi -- the quantity of spices are rather robust but they will work provided that you realize the differences between Indian and American vegetables. But the blog does give you a handy way to make this translation.

I don't think that she intended it that way, but one of the nicest things about her recipes is that she shows a picture of the ingredients, so you can adjust the amounts to American sizes. For the uninitiated: vegetables and dry spices sold in American markets are typically larger and sweeter than the corresponding Indian ones. For example, a "large" Indian onion is about an inch in diameter and quite sharp. A typical 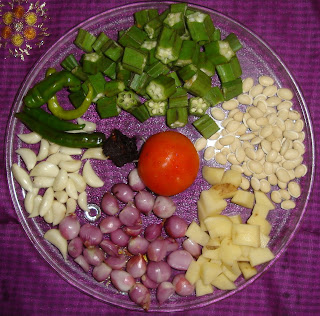 American Vidalia is a couple of inches in diameter and rather sweet (Imagine what adding 8 times the quantity of something sweet instead of sharp would do a recipe!). It's not just vegetables -- a "cinnamon stick" in India is actually cassia bark and is never more than an inch long and 1/8" wide. The corresponding spice in America would be 3-4 times the size. So, her pictures will help you cook by sight.

As of now, at least, you need to choose between 2 or 3 Chettinad recipes by people who know how to write recipes (such as Chandra Padmanabhan or Camellia Panjabi) or know how to adjust authentic recipes. Solai's Kitchen helps you do the latter at least with respect to amounts; her times, as far as I can tell, are still approximations. But ... the food is awesome, so the effort will be worth it.
at Friday, February 06, 2009