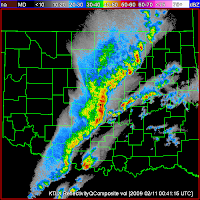 Today is one of those days where it feels surreal to work where I do. There was a tornado just north of Oklahoma City this afternoon; some people lost their homes, but no one was killed.

Starting this morning, you could feel the anticipation in the air. Lunch-time meetings were scheduled on contingency -- if the severe weather situation panned out, there would be no meeting. People were double-checking all their research instruments. "Why's it not showing up in AWIPS?," wails someone who'll later claim guidance algorithms are all a crock.

Once the storms started sweeping into the metro area, you could see the thrilled look on people's faces -- the ones who were not out chasing that is. "Too bad," mopes a CASA guy, "that the storms didn't put down a tornado when they were in range." The PAR guys had a spring in their step -- the line was a bit too long for a 90-degree sector scan, but good data were being collected all the same. "You can see the Zdr column," said the dual-pol guys to anyone who'd listen.

Towards evening, when the storms died down, the fishing stories started. "I bagged a tornado," someone claims.

UPDATE: The tornadoes in the Oklahoma City area caused some injuries, but no deaths. However, the ones south of us (which touched down after I wrote his post) killed three. So, the thrill of getting good data has been replaced by a funereal awe.
at Wednesday, February 11, 2009