Over Thanksgiving weekend, good friends of ours visited from Dallas.  He went to school at OU over a decade ago, so the Fred Jones Museum of Art (FJMA) was all new to him.   S1 loves fjma, so he tagged along too.  Some friends of ours (the kids call them grammy and granddad) also met us at the museum.  What else is there to do the day after Thanksgiving?
The new galleries look architecturally wierd, but they work surprisingly well.  Inside, you get an intimate view of an extraordinary collection of paintings: 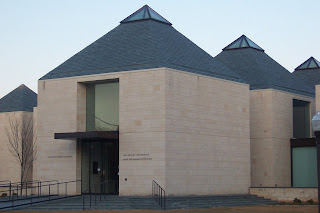 The exhibit of Clara Weitzenhoffer's French impressionist paintings set in a replica of her Oklahoma City home is easily the most unique thing about the museum. How many of us would get invited to the home of a wealthy, private collector? This is the closest that we can get (that's a Monet right above the backgammon table): 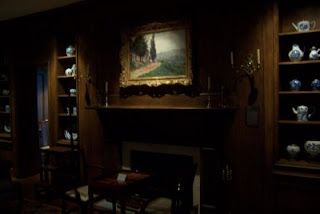 S1 really got a kick when we explained what it was that Native American woman was holding. I explained what a paddle was used for, but he didn't quite believe me. He went to grammy to confirm it, and she had to own up to being old enough that it was used quite frequently in Western Oklahoma when she was a kid.  Not on her, she was careful to explain. Um-hum. 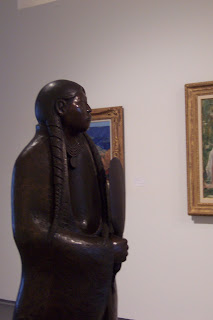 A Western painting of Mexican men standing outside a home reminded S1 of Indian temples.  It's mostly the paint work on the steps: 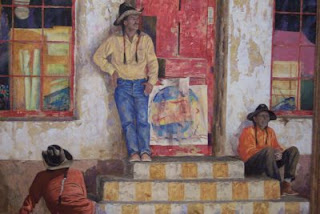 And his new favorite painting at the museum is one of mares in a circle.  Their rider are taking part in a prayer: 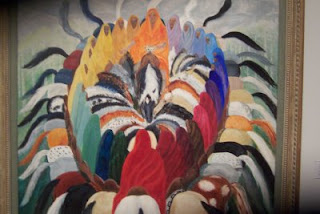 S1's favorite statue on campus is still the one on the grounds of the museum. It's of a farmhand relaxing in an open field: 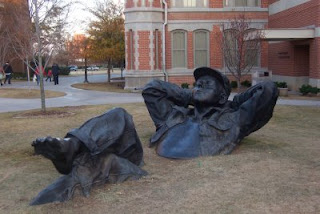 It barely beats out the ones of the football players in Heisman park.
at Monday, December 01, 2008