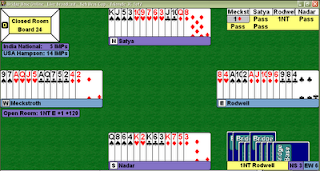 During football season, S1 is fond of asking me: "So if Ohio State plays OU, who are you going to support?" My answer is always the same: "when it happens, we'll see." A Sooner-Buckeye game is yet to happen.

But today's Vugraph on Bridge Base features Open teams from USA and India. Who would I root for? The Indians are totally outclassed, because playing for USA are Meckstroth and Rodwell (the Bridge counterparts to Jordan-Pippen or Ronaldo-Ronaldinho: these are simply the best pair the Bridge world has ever seen). And the Indians are playing quite badly too -- on the hand shown, South threw away his King-Diamond while still keeping the 7. That was worth 2 tricks and 8 IMPs. So, I found myself not quite rooting for the USA but just shaking my head at the performance of India.

Based on this experience, I know the answer to S1's question. If two of my teams play, I'll simply wish the losing team would pick up their game. I'd want both teams to give it their best, and then be quite happy if the better team wins.
at Sunday, March 01, 2009