Melbourne not so friendly anymore

Suddenly, it seems that Indians and Australians can not agree on how to interpret events.
A 21-year old Indian student was stabbed and killed in Melbourne. A few days later, a 29-year old Indian was set ablaze in the same city. Indians in the city were convinced that it was all racially motivated and protested that a string of attacks since 2004 had been systematically ignored by the police. The Australian police disagreed, called the events "crimes of convenience".
Another attack on an Indian student took place on a train. Video of this showed up on YouTube but was taken down because (some of?) the attackers were under 18. But of course, you can never totally shutdown video like this. The Australian response is "these guys are minors and this video is illegal" while the Indian response is "these guys are thugs ... why haven't they been punished?"
An Indian paper ran this cartoon: 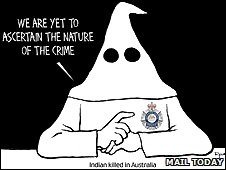 prompting outrage in Australia. A bit unfair to taint Australians with the legacy of the American South, but from an Indian standpoint, all racist white people wear hoods.

Meanwhile, the number of Indians wanting to study in Australia has plummeted by 46%. Indian students started considering Australia and the UK after 9/11 when the US made visas harder and harder to get. Does this mean that we start getting those students again? Or will they take another look at Indian universities which have also been getting much better?
at Monday, January 25, 2010