Climate change: polluters do not pay 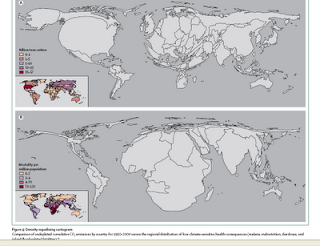 One of the major obstacles to addressing climate change is that as far as CO2 emissions are concerned, polluters do not pay. Holland and Mauritius may be equally impacted by a sea-level rise, but the Dutch will be able to build better pumps and dikes whereas the Mauritians will probably have to evacuate their islands.

A recent study has a "density cartogram" of CO2 polluters and who will be impacted by global warming. (In a density cartogram, countries with greater impacts are shown bigger -- these are used to depict the impact of votes for example so that Western states don't appear disproportionately bigger than their electoral impact).

The biggest polluters are the United States, Western Europe, India and China. The countries that will experience malaria, malnutrition, diarrhoea and floods are predominantly in Africa and the Indian subcontinent. The US, Western Europe and even China get away relatively scot-free. India and South America are probably the only major polluters who will also pay, but even there, it is the poor who will pay and the urban rich who will pollute. (India gets affected more than China because it is somewhat poorer and much more tropical.)